This Page Contains information about Replacing Front CV Joint Axle - 4x4 Differential Boot Remove Install Fix By nissantech in category Path Finder with 0 Replies. Last Upated: Sun Mar 01, 2020 [4166]
nissantech
Mon Oct 09, 2006
0 Comments
957 Visits
About a month ago, I noticed some great all over the inside of the wheel Fender Wells. At first I though I had ran over some grease or something since there was some construction near my work.

Then about two weeks ago, I took a trip to the local bakery. When I was coming out of the bakery store, I looked to the wheel of my 1998 Nissan Pathfinder. I noticed that the axle boot was torned. I kneel down to take a secon look, and sure enough, the cv joint axle boot was broken, and in the process, letting all the grease out and spilling it out all over the inner fenders. 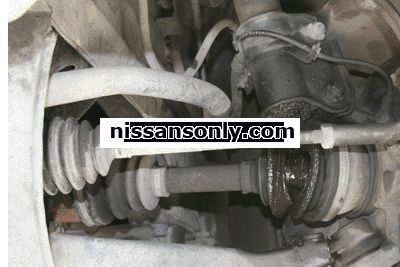 At first, my plan was to only replace the broken rubber boot since the axle itself was in good condition. I went to the local auto parts store and bout a boot cover for only $10 dollars. I figure It would be cheaper to buy a $10 dollar rubber boot than to replace the whole axle. 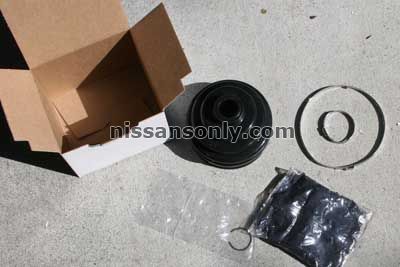 As I started to get more into, I realize that it was not going to be possible to just replace the rubber boot cover. It was coo complicated. So i dedcided to replace the whole cv joint axle instead. I went to the local auto parts store at Kragens and bought a rebuilt axle for $79 dollars (not bad, i thought it was going to cost me like $179 dollars) 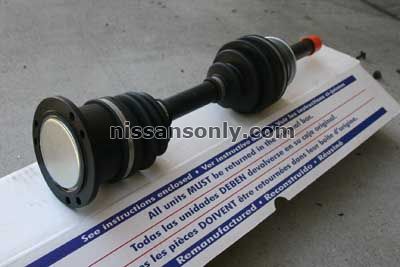 So here are the steps to replace the CV Joint Axle on my 4x4 Nissan Pathfinder. I spent the whole weekend on this project. I think it took me so much time because I didn't have a repair manual and I couldn't find any tutorial or guide on the internet that would show an online howto. That's why im now writing one so if there is anyone out there in my shoes they will have some information on how to perform this job. So here we go.. 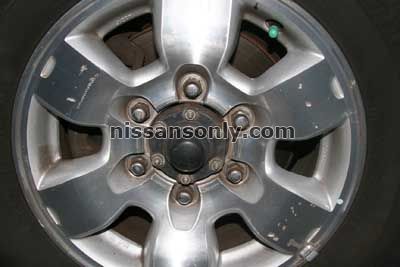 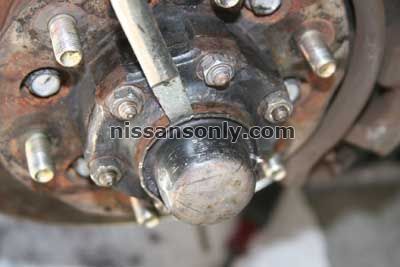 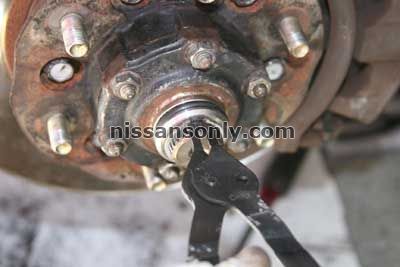 Remove Sub Hub Assembly - Now that you have the sub hub cover removed and the snap ring, its time to remove the Sub Hub Assemply. You will need a 13mm socket to remove all six nuts. 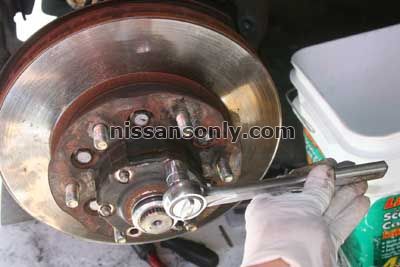 Remove the two screws - To release the lock washer holding the wheel bearing lock nut, you will need to remove the two scres holding this lock waher. This is very simple to do, JUST MAKE SURE YOU USE THE PROPPER SIZE OF SCREW DRIVER. too small or too large screwdriver can damage the crew heads and then you won't be able to remove them. So use the correct size, otherwise, you run the risk of ruiining the screws. 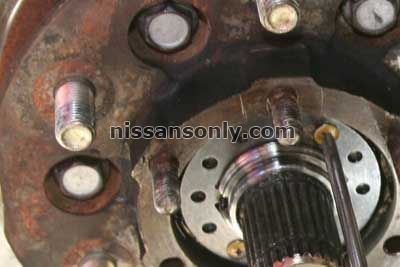 Remove lock Washer - To remove the Lock Washer after removing both screws, I used a pick tool to remove it. Using a pick tool is the easies way to get it out. but you can use whatever works for you. 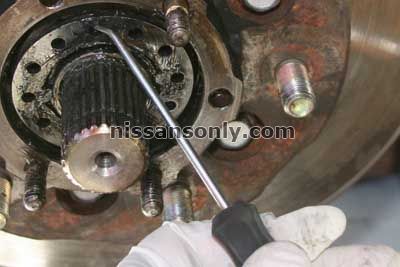 Remove Wheel Bearing Lock Nut - To remove the wheel bearing lock nut, I use three long screw drivers. Two I put on the two holes on the nut and one to turn the other two screwdrivers. Like in the picture below: 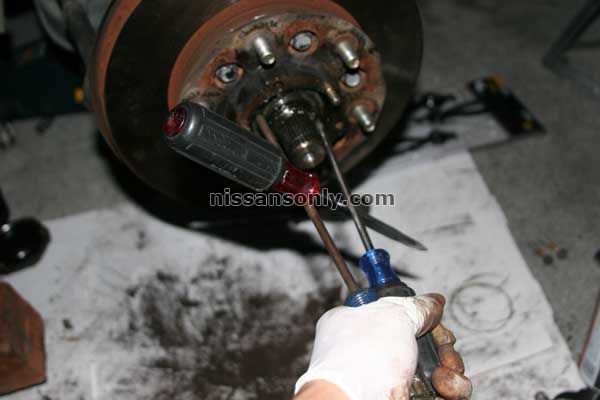 Remove Brake Caliper - Now Remove the break caliper. This is held by two big bolts. You will need to use some muscle for these two guys. If you have an impact gun, its much easier. The two bold are found behind the caliper. 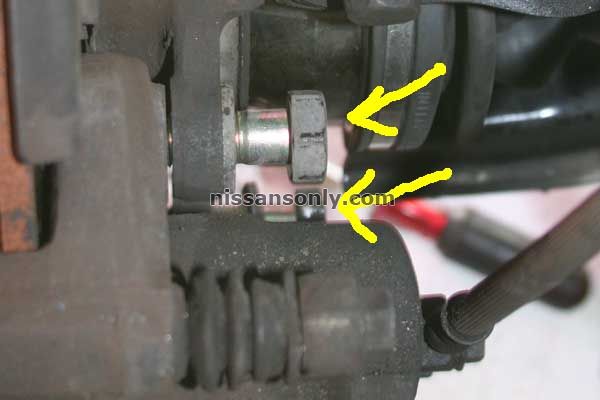 To avoid any damage to the brake hose, I strongly recommend that you use a piece of hanger wire or a strong string to hang the caliper, this will avoid putting any pressure/stress on the brake hose iftsel. See illustration below: 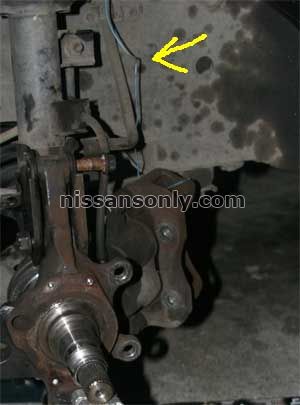 Next, remove the wheel bearing and rotor from knukle. (no image)

Remove Dust Cover - Now remove the brake dust cover by removing the four screws holding it to the knuckle. 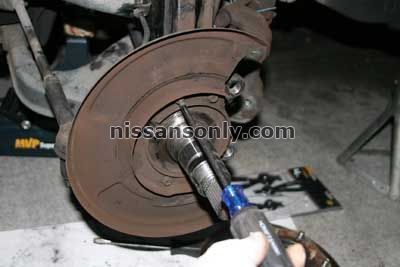 Remove ABS Sensor -Once you have removed the Rotor, you will see the ABS Sensor. I removed the sensor, I don't think its necessary, but I removed it just to be safe so i wouldn't damage it. If you decide to remove it, make sure you use some kind of spray lubricant to remove it, it will be stuck pretty hard in there. 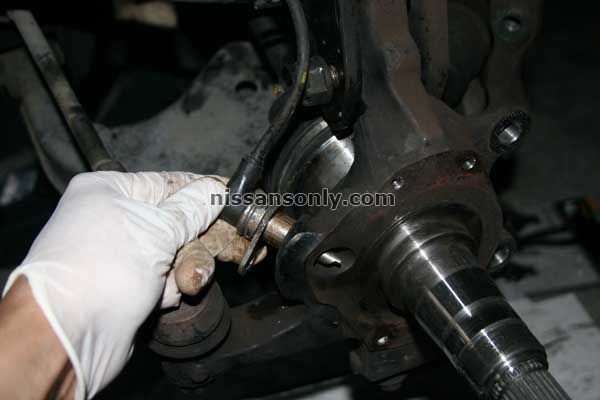 Knuckle Ball Joint Removal - I have to say, this is the harderst part to remove for me. Here I had to choices.
1. Remove the three lower balljoint-to-lower link bolts (1 in the picture)
2. remove the big Ball Jointbig bolt in the. (2 in the Picture)
I went with option 1, it was the easiest for me to do since i didn't have power tools. 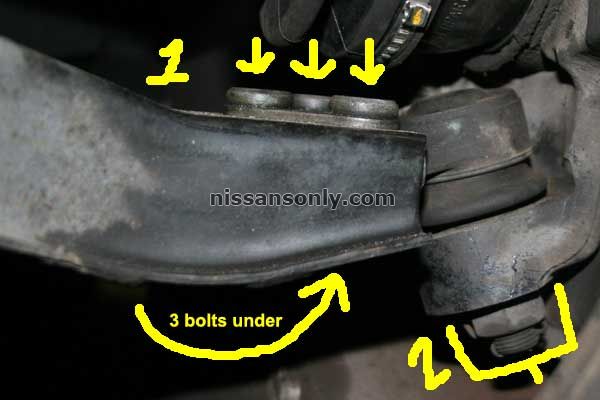 Strut Bar Bolts - Now its time to remove the two big bolts holding the strut with the knuckle. These two bolts are tough to remove, I used lubricant to loosen up all the rust. Once I was able to remove the nut, I hammered it out. 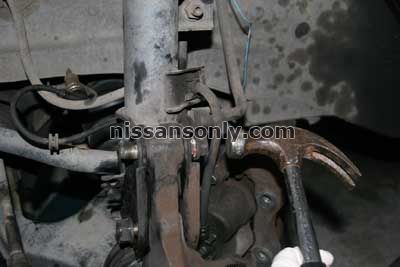 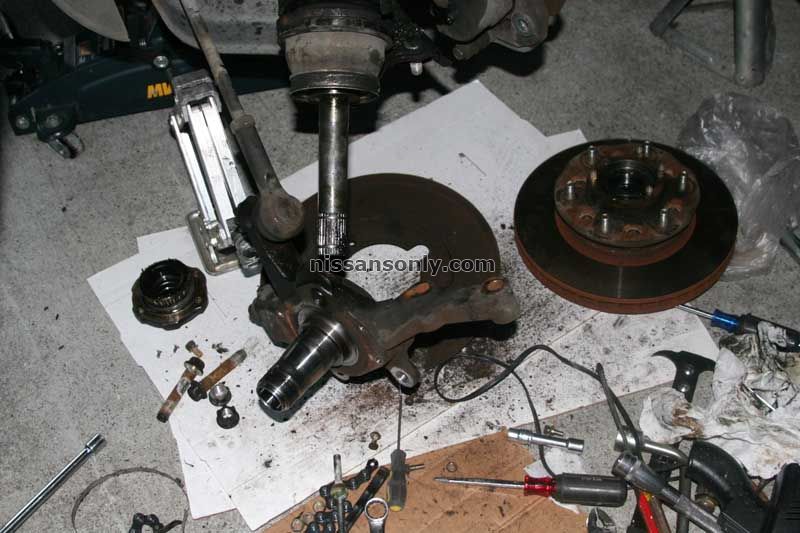 Finally - The last step into removing this sucker. Unbolt the six bolts holding the axle on the front differential. 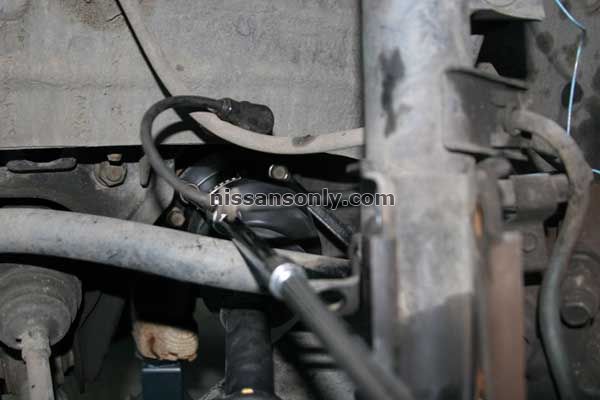 To Install - Just do the reverse with the new CV Joint.